Most digital avalanche transceivers analyze the multiple signals and attempt to estimate the number of, and the location of, the victims. These transceivers then allow you to "suppress" a specific signal. This is done by "ignoring" a signal based on the previously analyzed signals. The buried beacon will continue to transmit a signal, but the searching transceiver will try to ignore that strong transmission and direct you to the next-closest transceiver. Manufactures refer to the process of ignoring a signal as either "marking," "masking," "suppressing," or "flagging."

It is critical that you always confirm the location of each victim using an avalanche probe before suppressing its signal. 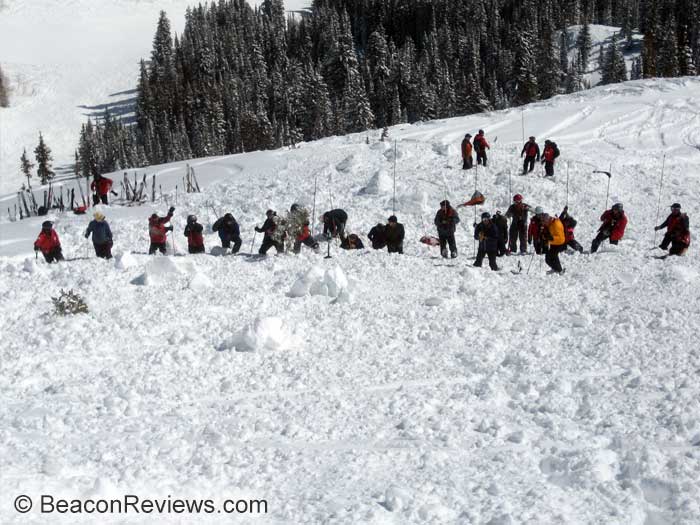 A probe line search within a ski area

And finally, digital transceivers can be confused when receiving transmissions from older, single-antenna analog transceivers, that emit a continuous carrier signal.

Although none of the transceivers are perfect at suppressing a signal, they do a pretty good job. If your avalanche transceiver mistakenly returns you to a victim you previously suppressed, you should repeat the suppression process.

It is very important that you read the user's manual that comes with your transceiver and that you practice using your transceiver's multiple burial features—none of these techniques are intuitive enough to figure out when your partner is buried.

The typical approach to using the marking feature is to locate the first victim, hold the searching transceiver still, and momentarily press the "mark" (or "flag") button. The searching transceiver should then point you toward the next-closest victim. All transceivers that support marking require you to be within a few meters (i.e., either three or five) of the transmitting beacon before you can mark it.

Testing a transceiver's ability to suppress a signal is complicated because there are so many variables (e.g., the amount of time the signals overlap, the individual cadence of the transmitting beacons, the distance between the transmitters, how quickly the searcher moves toward the second transceiver after suppressing the first, the starting location of the search, etc). The individual transceiver reviews provide details on how to search for multiple burials using that model of transceiver. For example, the Tracker3 only ignores the first victim for 60 seconds. You can read the details of multiple burial tests here.

In addition to using a transceiver's built-in electronics to suppress a transmitter, you can use the "generic" expanding circle or micro search strip techniques to locate multiple victims. The advantage of these techniques is they can be done with any avalanche transceiver. The disadvantage is they require significantly more training and practice.