The initial goal of shoveling is to expose the patient's airway and to remove snow from the patient's torso ("brow to belt") so they can breathe.

It is important that you practice shoveling—it's the most time-consuming part of a rescue! And at a minimum, you should practice rapidly deploying your shovel every time you practice using your transceiver.

There are two basic shoveling strategies. Which one you choose should be based on the number of rescuers available. These strategies are explained on the following pages.

Companion shoveling is appropriate when there are a limited number of rescuers—typically one to four. It moves the most snow with the minimum effort. When you have more resources (i.e., more rescuers, more muscle, and more calories to burn), conveyor belt shoveling will blast through a large amount of snow rapidly. 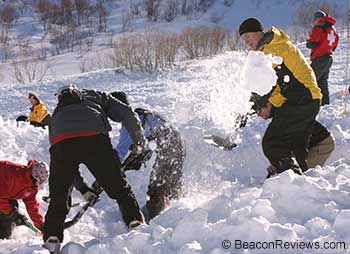