Probing, sometimes called pinpointing, is a continuation of the search that began with a visual search for clues and proceeded through the transceiver search (probes are also helpful when the victim isn't wearing an avalanche transceiver). The search isn't complete until you confirm the victim's location using a probe. 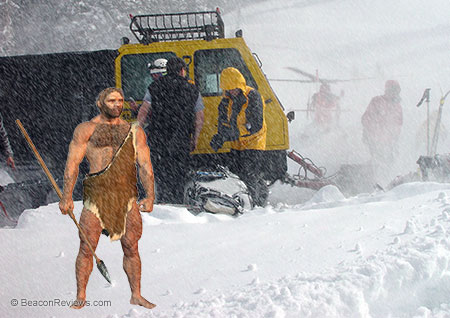 Compared to using a digital avalanche transceiver, finding a buried person by pushing a stick into the snow is caveman-style searching. However, probing is reliable. Yes, you may mistakenly think you hit the victim when you haven't (a false positive), but your probe will never pass through the victim (a false negative).

There are three types of probing: transceiver probing, spot probing, and probe line probing. These methods are discussed on the following pages.

It is important that you practice deploying your probe throughout the winter. To do so, grasp the cable in one hand and then throw the probe downhill. Gravity and your toss will help the initial alignment of the probe's sections. Then pull on the cable while holding the section nearest the cable with the other hand (you can perform this pulling process as your probe is flying through the air). Make sure you pull until the probe makes a sound to indicate that it is locked. If you probe requires that you perform a task other than pulling to lock it (e.g., turning a knurled knob or positioning a knot in a groove), it's time to buy a new probe.

A probe that hits a human body, or a backpack, has a slightly springy, "boingy" feel. Don't press too hard. Your job is to locate rather than perforate. Branches can also have a springy feel (and occasionally I've smelled the scent of pine on the tip of the probe). A probe that hits skis, a boot, or a snowmobile has a much different feel. As you would expect, rocks have a hard feel and can make a clicking sound. Ice layers (and sometimes frozen dirt) can have a "sticky" feel where the tip of the probe is momentarily held by the ice. If you are unsure whether your probe is contacting the victim, probe several times around your initial probe hole to gauge the size and "feel" of the object.

When you find the victim with your probe, leave it in place and begin shoveling. It is important that you leave your probe in place so you dig in the correct location. The probe is also a good reminder to not stand on top of the victim.

Next Topic: Probing an Avalanche after a Transceiver Search